„Instead of energy going to waste – waste going into energy!” - titled Maroš Šefčovič, vice president of the European Commission, the blog post written about his visit in Budapest (16th June 2015) as part of the Energy Union Tour he launched in order to better explain member states what the Energy Union could bring in each of the national contexts.

As an example for energy efficient developments, THERMOWATT Ltd’s wastewater heat recovery system at MOM Cultural Centre has been introduced to the vice president, who’s thought about the concept of co-financing (EU+municipality funds) a smart heating and cooling system’s development to enhance energy efficiency  was: „it’s smart, simple, and highly efficient”

The THERMOWATT team is very proud to have had the opportunity to showcase its system solution during the Energy Union Tour and to recieve such a high recognition from Mr. Šefčovič. 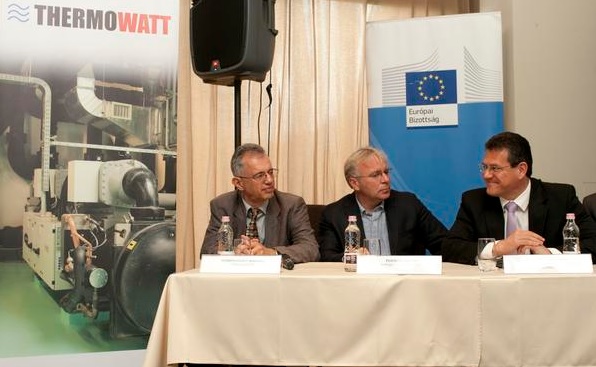 Click on the picture above to go to the gallery of the event.

To read more about Mr. Šefčovič’s visit and the Energy Union Tour: http://ec.europa.eu/commission/2014-2019/sefcovic/blog/instead-energy-going-waste-waste-going-energy_en